Labor must park its plan to lock up more public land

Bush users have converged on State Parliament today against a plan to lock up more of Victoria’s public land.

More than 77,000 hectares of public land will be locked up if the Andrews Labor Government adopts recommendations from the Victorian Environmental Assessment Council’s Central West Investigation final report.

Leader of The Nationals and Member for Murray Plains Peter Walsh said bush users and their families, from both country Victoria and the city, were on a unity ticket against losing access to public land.

“Public land should be exactly that – for the public – but under Labor, all Victorians who enjoy recreational activities like camping, 4WDing, horse riding, prospecting or hunting are being pushed out.

“If the Andrews Labor Government adopts VEAC’s recommendations access for many of these activities will be severely restricted or stopped altogether.”

A petition, tabled today by Shadow Minister for Public Land Use and The Nationals Member for Eastern Victoria Melina Bath, received nearly 4500 signatures in support of public land staying for the enjoyment of the public.

“Bush users want to preserve their ability to go bush and take part in activities they have enjoyed for many generations,” said Ms Bath.

“The bush is a way of life in country Victoria and responsible bush users make sure they leave our state forest in a better state than they found it.

“Conservation and bush access do not have to operate exclusively.”

The Victorian Government has until February 2020 to consider the recommendations of the Central West Investigation final report. 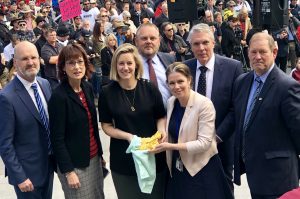